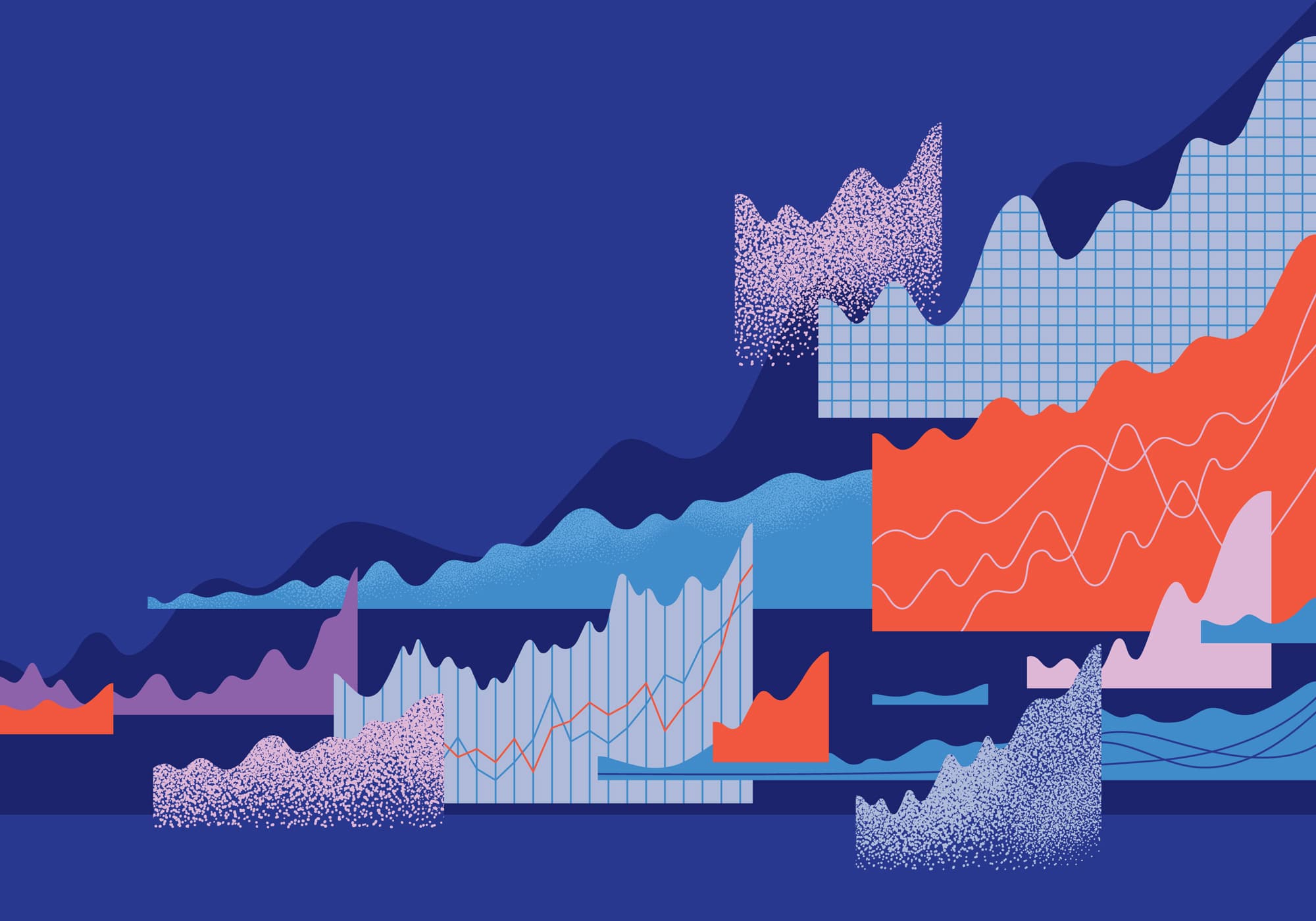 16 Social Media Statistics You Need to Know for 2021 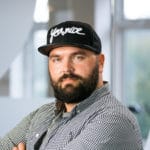 Sure, you might know that social media is important for reaching your audience, but do you really know how your audience uses each app?

It’s hard to fathom the expansive reach of social media at this point in the game without the numbers in front of you.

By nature, social media is fluid.

Social media demographics change all the time. Facebook, while originally designed for college students, isn’t quite the hip platform it was 20 years ago.

Facebook might still be the leading social media app worldwide, but that doesn’t mean its users aren’t growing and changing. People use the app differently than they did even five years ago, and we can’t be sure what the future holds for Facebook.

Today, most Facebook users live in the Asia-Pacific region and “other” which most likely includes the Arab world and Africa.

If you want to reach young demographics in the Middle East, India, Asia, and Africa, Facebook is a solid choice.

2. 1.82 Billion People Use Facebook at Least Once a Day

As of Facebook’s third-quarter earnings release, 1.82 billion people log into the app every day – up 12% from the previous year.

Now keep in mind: Facebook’s growth among youth in the west has plateaued. Most of this 12% growth is thanks to the pandemic lockdown restrictions and smartphone accessibility in regions beyond the west.

3. Less Than 2% of Facebook Users Browse on Desktop Alone

Only 1.7% of Facebook users scroll the app on their desktop and nothing else. Meanwhile, only 18.5% say they use both mobile devices and desktop browsers to access the app.

Mobile is the biggest market at 80% of all logins. Keep this in mind as you develop your ad campaigns and related landing pages.

4. The Silent Generation is the Fastest Growing Age Group

As of late 2019, nearly 40% of the silent generation (those born before 1945) said they use Facebook regularly – a massive jump from just 26% in 2018. Another 60% of baby boomers say they maintain a Facebook profile as well. 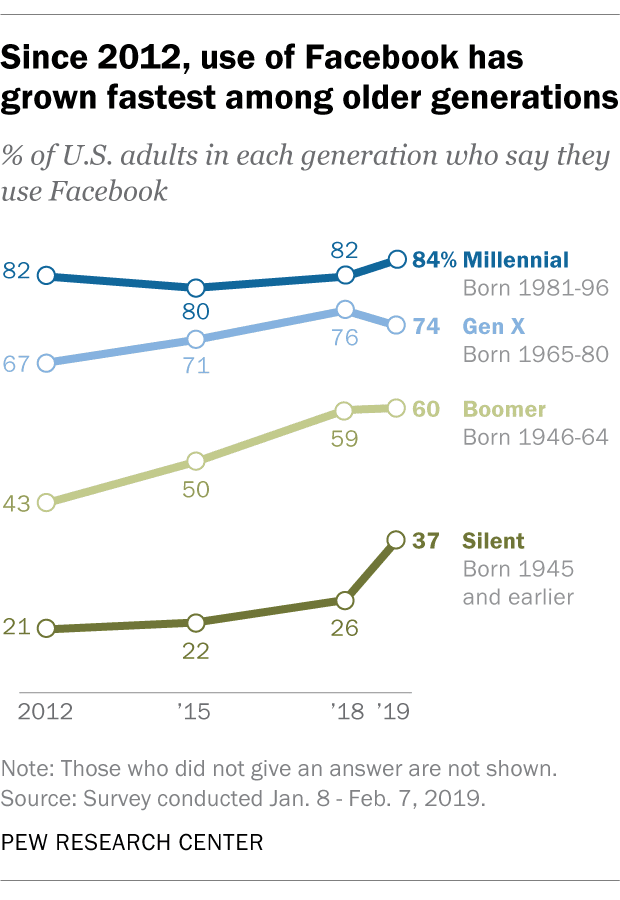 Meanwhile, Facebook use among Generation X and younger demographics have either plateaued or even dropped.

All the hyper-targeting in the world can’t help you reach your audience if they simply don’t use the app.

As far as U.S. users go, most college-educated high earners prefer Facebook compared to say, Snapchat and Instagram. Facebook users are also more likely to live in an urban area although usage among both suburbanites and rural folks is pretty high as well. 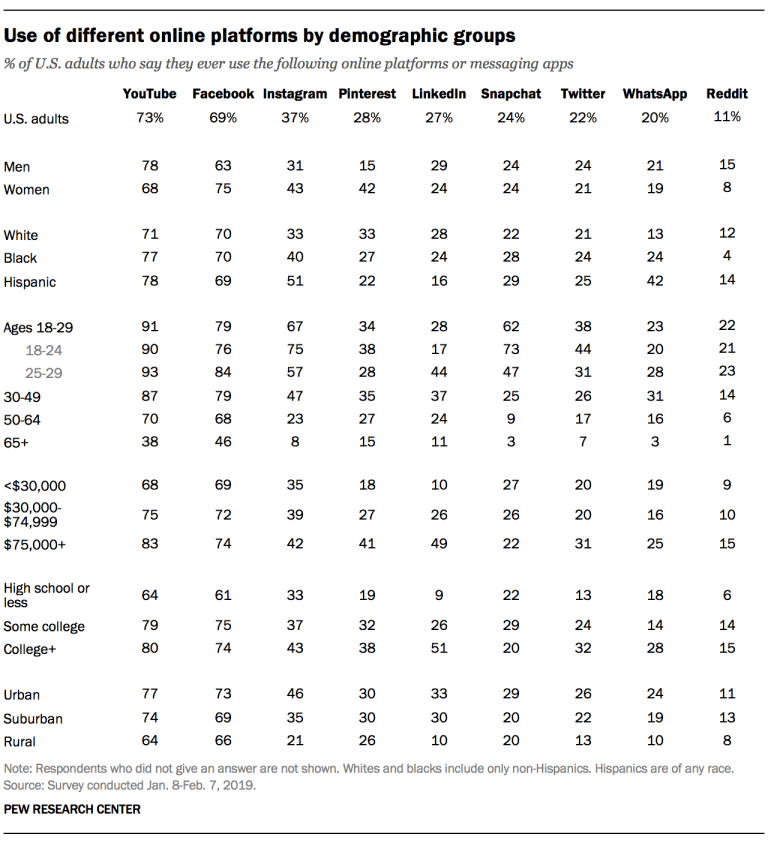 6. Your Average Instagram User Only Spends 15 Minutes on the App

According to Entrepreneur, most Instagram users only spend about 15 minutes scrolling through content on the app – the lowest time spent on any social media app after Twitter (which clocks in at about a minute).

Now, some sites put the average time spent on the app much higher at about 53 minutes. The key difference here most likely lies in which features people use.

If someone regularly updates their story, shares Reels, and uses IGTV, they’ll no doubt spend more time on the app than someone who only checks their feed.

Instagram’s user base is still fairly young. Less than half of folks between 30 and 50 use the app and most of them are probably in the 30ish range. Meanwhile, less than a quarter of baby boomers keep an Insta account.

Globally, the United States is home to the most Insta-fans: 140 million. India comes in at a close second followed by Brazil, Indonesia, Russia, Turkey, and Japan.

Aside from Turkey, European countries don’t appear until slots nine and ten with the United Kingdom and Germany, respectfully.

TikTok emerged on the scene in 2020 like the Kool-Aid Man, winning hearts and minds – and it shows no sign of slowing down. Although TikTok faced a little partisan political blowback in the United States, the app’s dedicated user base makes it a force to be reckoned with in 2021 and beyond.

We loved TikTok in 2020, didn’t we folks? TikTok beat out all apps in the Zuckerberg empire for the most downloads in 2020, making it the top downloaded app of the year with about 2 billion downloads globally.

You know your social media app is doing well when Instagram starts appropriating your features which is exactly what happened when Instagram launched Reels.

Over 100 million Americans use TikTok every month and about half that log into the app every day. That’s quite a feat for a fairly new app as far as U.S. audiences go.

TikTok shows us how important it is to design an app with engaging features, a minimal learning curve, and the ability to reach millions organically if you can create awesome content.

Although Millennials and some Gen Xers love TikTok, their real popularity shines in the 18-24 age range. This also tells us that teens and young adults love the interactive video content.

While 30% is still a fairly large minority (especially compared to Facebook’s 1.7% desktop users), an overwhelming amount of YouTube users prefer mobile for streaming their favourite content: 70%.

Considering this 30/70 split, it’s even more important for brands on YouTube to figure out which devices their specific audience segments prefer so they can create the most device-friendly content.

That’s right: Even more high-earners have active YouTube accounts than Facebook accounts. The truth is, this really tells us that people of all demographics use YouTube every day.

But that’s not all. This also tells us we can’t take certain audiences for granted on YouTube. You’re competing for attention with every other brand, topic, and channel imaginable.

You must laser-focus your strategy to reach the right people with better content than what’s already available.

According to YouTube, we watch over a billion hours of video content every single day. To put this into perspective, YouTube enjoys a solid two-billion monthly active users around the world in 80 languages.

With so much content published on the app each day, creators will need to double-down on quality if they want the algorithm to show people their content.

Pew Research shows us that 73% of all adults in the United States use YouTube compared to less than 70% for Facebook. Ouch!

As 5G speeds sweep the globe, particularly in Africa, India, and the Middle East, don’t be surprised if you see YouTube overtake Facebook as the most popular app. 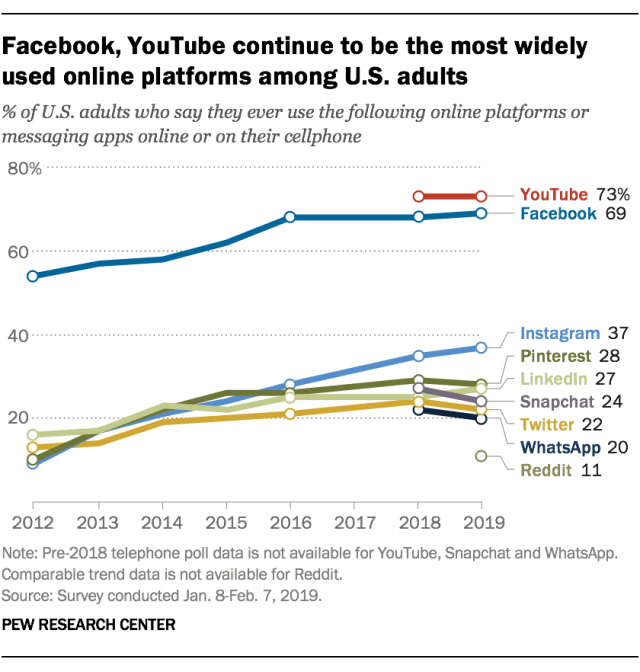 That’s right! Second only to Google, YouTube is the most popular search engine in the world. Every day, people use the YouTube search bar to find new ideas, answer questions, and discover topics.

Make sure you’re optimising every piece of content you publish. Use relevant keywords in your title, tags, and description. Choose similar language and keywords to high-traffic videos in your niche to increase your chances of appearing in the queue after them.

Optimise your CTA to keep people on the YouTube app – not navigate to your page – and YouTube will reward you.

Put Social Media Statistics into Action in Your 2021 Plan

Social media statistics and facts are nothing on their own. Sure, they’re great for beefing up your blogs and proving value, but it’s how you use them that matters.

With these stats, you should have a solid idea of where your audience hangs out online in 2021 so you can develop the right strategies for each platform. That’s really what it’s all about.