Addison Rae Easterling is the highest-earning TikTok personality, with an estimated annual income of $5 million. In other words, she makes about $155 every 15 minutes. In addition, she has a following of 85.3 million on TikTok, 40.1 million on Instagram, and 4.8 million on Twitter – and is showing no signs of slowing down.

So, how did she rise to TikTok stardom? Here’s an inside look at her growth through the years and how she manages her brand today.

Who is Addison Rae Easterling?

Addison Rae Easterling is the daughter of Monty Lopez and Sheri Easterling. On October 6, 2000, she was born in Lafayette, Louisiana, where she lived with her parents and two younger brothers, Enzo and Lucas Lopez. Her family is all involved with social media as well to varying degrees. However, none of them are quite as famous as Addison Rae.

At just 6-years-old, Addison Easterling began competitive dancing. Eventually, she began attending Louisiana State University, studying sports broadcasting. However, that was around the time she also started on TikTok.

When her TikTok account took off, she decided to step out of school and move to LA to focus on her success as a social media influencer. Her family supported her decision and moved along with her to the new city. In LA, she also joined the Hype House – a creative collective mansion for TikTok influencers to foster creativity and collaboration. While she doesn’t live in the mansion with the other influencers, she regularly visits and works alongside the other residents, occasionally appearing in their videos and vice versa. 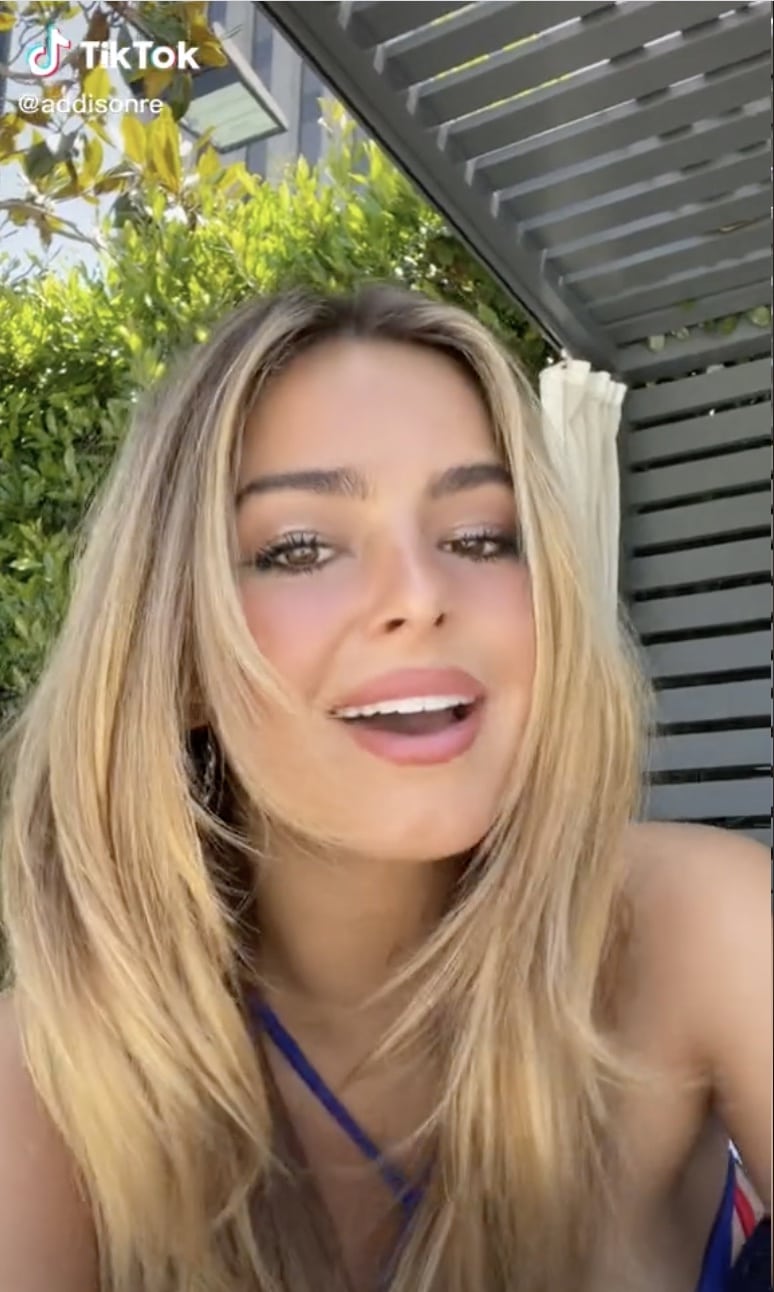 Addison Rae Through the Years

Addison Rae grew to fame on TikTok when she was 19 years old, but she didn’t stop there. Her following opened doors for her to pursue other dreams and passions. Here’s an overview of some of her most famous content.

In July 2019, Addison Rae posted her first TikTok. It was a lip-sync of the song “Love Me Like You Do” by Kelsea Ballerini. She was surprised to see over 93,000 likes on that video. From that moment forward, she was hooked.

Later that month, her next big break came when she posted a lip-syncing TikTok to Mariah Carey’s song “Obsessed.” Mariah Carey herself liked that video, which caused Rae’s popularity to skyrocket, receiving nearly a million likes.

She continued posting videos which were primarily dances and lip-syncing videos. By October of that year, Addison Rae’s TikTok account hit its first million followers. A month later, she pursued her career as a TikTok influencer full-time.

Now that she was no longer in university, she could focus all her time on creating content for TikTok. The collaborative nature of the Hype House helped boost her popularity, which took off even further in early 2020.

She now posts videos both of herself and in collaboration with others. Some of her more notable collabs include fellow TikTok influencers Charli and Dixie D’Amelio, and Avani.

Addison Rae on Other Platforms

Her expanding social media presence introduced her to Mason Disick in March 2020, when they began collaborating for content. Eventually, she also developed ties to his mother, Kourtney Kardashian. Rae and Kardashian formed a very close friendship, which led to Rae’s appearance on the show “Keeping up with the Kardashians.”

In July 2020, she and her mother began a podcast on Spotify called “That Was Fun?” which they’ve just renewed for a second season.

Rae had the chance to use her on-camera training in film when she signed on with Netflix as the lead in their movie He’s All That. It came out on Netflix on August 27, 2021, amidst mixed reviews.

The movie is a gender-swapped remake of the 1999 film She’s All That. Rae plays the female lead, Padgett Sawyer, who is an Instagram influencer. The plot revolves around Sawyer’s attempt at turning the least popular boy in school into a prom king.

She had acting classes three times each week and regular Zoom coaching lessons to prepare her for the role. She pulls her inspiration from Julia Roberts, Angelina Jolie, Jennifer Aniston, Joey King, and Zendaya.

But this movie won’t be the last in her acting career. Her contract includes multiple movies with Netflix, so expect to see her streaming in the future. She will even have a chance to be the executive producer on some of the films.

On March 18, 2021, Addison Rae realized her dream of singing when she released her first single, Obsessed, through Sandlot Records. She was involved in every part of the production, from songwriting through its release.

The pop song is about self-love and acceptance. When she wrote the lyrics, she pulled from her personal experiences to create a heartfelt story with meaning to her. In addition, she used ideas from other artists. Most notably, she was inspired by Taylor Swift, who also sings about personal experiences.

To go along with her single Obsessed, she created a music video. In the music video, you can see her singing and dancing with an expressive motion that reflects the personal nature of the theme. Her outfits combine a sexy look with a touch of playfulness. Some of the unique costumes included a catsuit as well as a bolero with a bra top. Her look in the music video is very different from the girl-next-door her fans see on her TikTok videos. However, Rae says that the outfits reflect another side of her that always existed. The video just gave an outlet to express that part of her personality.

Her single attracted a large amount of media attention and earned an invitation to “The Tonight Show” with Jimmy Fallon. Her segment was an opportunity for her to promote her new song. She also had fun showing some popular TikTok dance moves, many of which other influencers choreographed.

Today, her sponsorships and collaborations account for two-thirds of her income.

Iamkoko.la is an online clothing and accessories shop. They often get popular influencers and celebrities to model their clothing brand. For example, Addison collaborated with the company to sell apparel like her “Like a lady” crop top and sweatpants.

She also collaborated with Fanjoy, an ecommerce shop that sells merchandise created in collaboration with famous artists and influencers. These products are another way for fans to connect with their favorite creators. Rae’s products include clothing, phone cases, journals, and mugs.

Addison Rae became a global ambassador for American Eagle in 2020. This partnership generated over $4.26 million in Media Impact Value in just over six months. One report showed that each of her posts produced nearly $7,000 in MIV.

The sponsored posts show Rae posing or dancing in American Eagle clothing. One of her top posts generated over $673 in MIV. It was a dance staged next to Mickey Mouse to promote American Eagle’s partnership with Disney.

Addison Rae collaborated with one of her best friends, Kourtney Kardashian, by promoting SKIMS. SKIMS is a shapewear line developed by the Kardashians. In the ad, Rae is the main face of the line’s first-anniversary campaign.

Addison Rae has multiple pictures of her in FashionNova outfits on several of her social media platforms. FashionNova is one of the most popular online clothing stores. It used other famous influencers like Kendall Jenner, Cardi B, and Adrienne Bailon in the past.

Rapper The Kid Laroi, whose real name is Charlton Kenneth Jeffrey Howard, wrote a single called “Addison Rae.” In his song, he called her out with the line, “I need a bad b—ch, Addison Rae.”

Rae responded with a TikTok video showing her listening to the song. That video received over 14 million views, which in turn helped boost Kid Laroi’s following.

In early August 2020, Addison Rae launched her beauty and cosmetic line. Then, on August 19, 2021, she brought her brand to Sephora, a makeup store she had always loved. She said that having a physical location will allow customers to test the products themselves before investing in them.

Her makeup is vegan and cruelty-free. It includes:

Collaborating with a TikTok Influencer

Collaborating with a TikTok influencer like Addison Rae can boost your brand through their established online following. If you are interested in starting a partnership, reach out to the influencer or their manager to discuss what content you would like to promote.